The Ampere-Maxwell equation relates electric currents and magnetic flux. It describes the magnetic fields that result from a transmitter wire or loop in electromagnetic surveys. For steady currents, it is key for describing the magnetometric resistivity experiment.

The Ampere-Maxwell equation in integral form is given below: 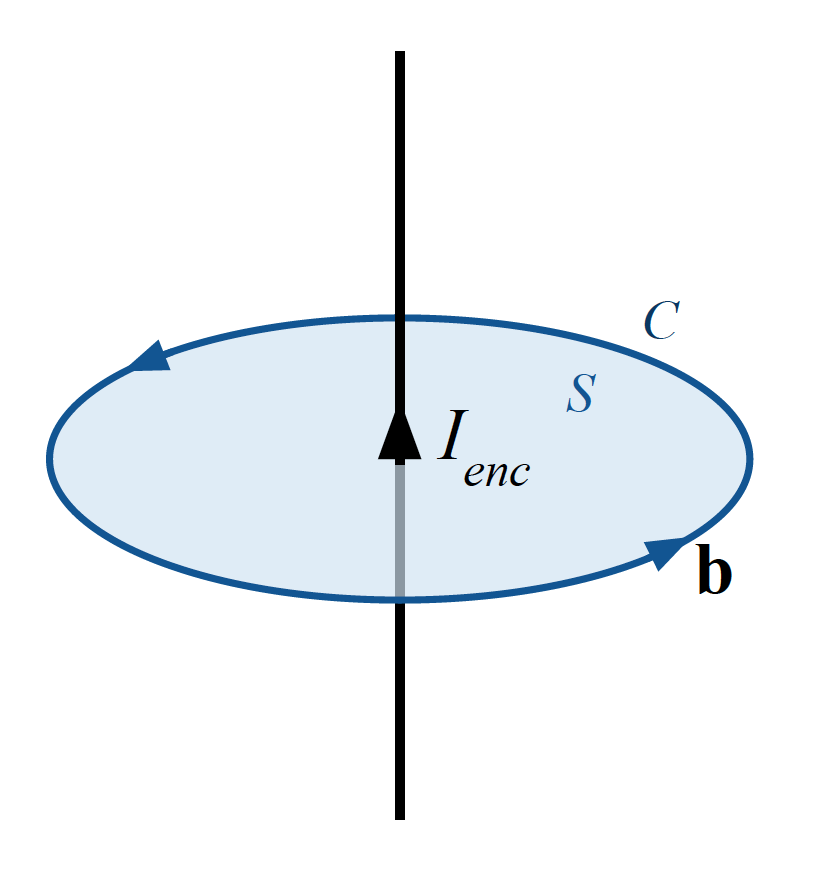 The first term of the right hand side of the equation was discovered by Ampere. It shows the relationship between a current \(I_{enc}\) and the circulation of the magnetic field, \(\mathbf{b}\), around any closed contour line (See Fig. 36). \(I_{enc}\) refers to all currents irrespective of their physical origin.

The second portion of the equation is Maxwell’s contribution and shows that a circulation of magnetic field is also caused by a time rate of change of electric flux. This explains how current in a simple circuit involving a battery and capacitor can flow. The term is pivotal in showing that electromagnetic energy propagates as waves. 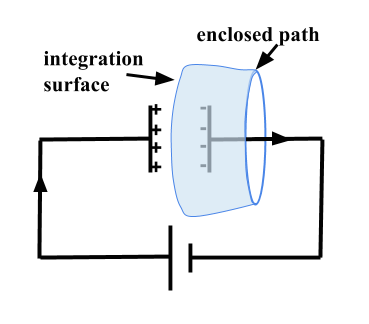 Fig. 37 Integration over a capacitor¶

For example, imagine integrating over a surface associated with a closed path such as the one showed in Fig. 37. We can define the surface to be the area of the circle, as in Fig. 36, or alternatively, as a stretched surface, as shown in Fig. 37. In the first case, the enclosed current is the flow of charges in the wire. In the second case, however, there are no charges flowing through the surface, yet the magnetic field defined on the enclosing curve, \(C\), must be the same. This apparent discrepancy is reconciled if we take into account the displacement current, which is the time rate of change of the electric field, between the two plates. This integration is the same as if we were integrating over a flat surface with the current wire crossing it.

The integral formulations are physically insightful and closely relate to the experiments that gave rise to them. They also play a formative role in generating boundary conditions for waves that propagate through different materials.

When dealing with the propagation of EM waves in matter the currents \(I_{enc}\) are usually dealt with in terms of current densities. The integral equation above is thus written as

where the current densities are:

The free current is caused by moving charges which are not tied to atoms, often referred to as conduction current. In contrast, the bound current is induced by a magnetization or a polarization in bulk materials. When a magnetic material is placed in an external magnetic field, a magnetization current will be induced due to the motion of electrons in atoms. Likewise, when an external electric field is applied to a dielectric material, the positive and negative bound charges within the dielectric can separate and induce a polarization current density internally.

Continuing to treat the free current and bound current separately and using the constitutive equations: \(\mathbf{b} = \mu_0(\mathbf{h} + \mathbf{m})\) and \(\mathbf{d}= \varepsilon_0 \mathbf{e} + \mathbf{p}\), the integral form Ampere-Maxwell equation can be reformulated as:

Differential equation in the time domain¶

Differential equations in the frequency domain¶

We use the \(e^{i\omega t}\) Fourier Transform Convention to transfer our equations from the time domain to the frequency domain.

If we deal with linear isotropic media then we have

and the Ampere-Maxwell equations can be written as

The first observation that spurred researchers to look for the relationship linking magnetic field and current was made by Hans Christian Ørsted in 1820, who noticed that magnetic needles were deflected by electric currents. This led several physicists in Europe to study this phenomenon in parallel. While Jean-Baptiste Biot and Félix Savart were experimenting with a setup similar to Ørsted’s experiment (that lead them to define in 1820 a relationship known now as the Biot-Savart’s law), André-Marie Ampère’s experiment focused on measuring the forces that two electric wires exert on each other. He formulated the Ampere’s circuital law in 1826 [Gri99], which relates the magnetic field associated with a closed loop to the electric current passing through it. In its original form, the current enclosed by the loop only refers to free current caused by moving charges, causing several issues regarding the conservation of electric charge and the propagation of electromagnetic energy.

These efforts have lain solid foundations for the development of modern electromagnetism.