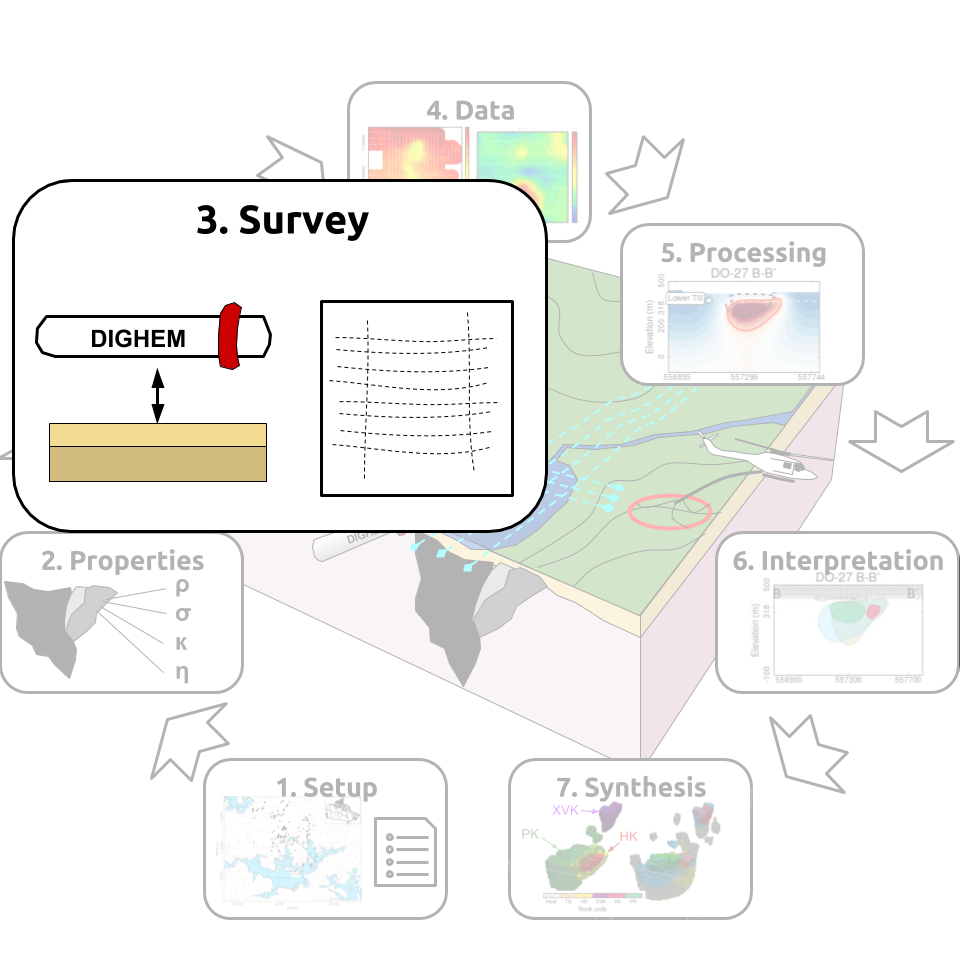 The TKC deposit has been used as a testbed for airborne and ground geophysics, with over 10 known surveys carried out over the deposit. In this section, we review the acquisition configuration of 5 of these surveys.

All data used in this study were converted from their native coordinate system to the NAD27-UTM 12N (EPSG 26712) projection prior to processing. 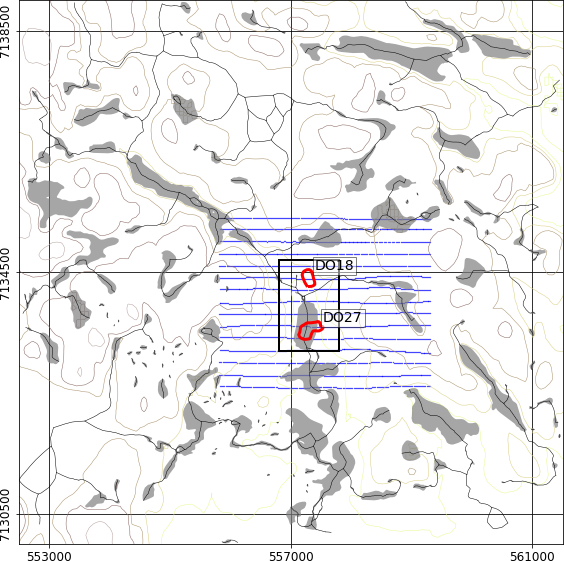 The first airborne survey acquired at TKC used the DIGHEM system. These data, acquired in 1992, resulted in the discovery of both DO-27 and DO-18. The survey consisted of 15 lines flown in the EW orientation at a 200 m line spacing, for a total of 52 line-km. The nominal flight height of the survey bird was 30 m. The DIGHEM system was equipped with a co-axial and a co-planar loop configuration. The table below summarizes the separation and frequencies measured by each coil pair. A magnetometer sensor inside the EM bird was used to collect total field magnetic data. 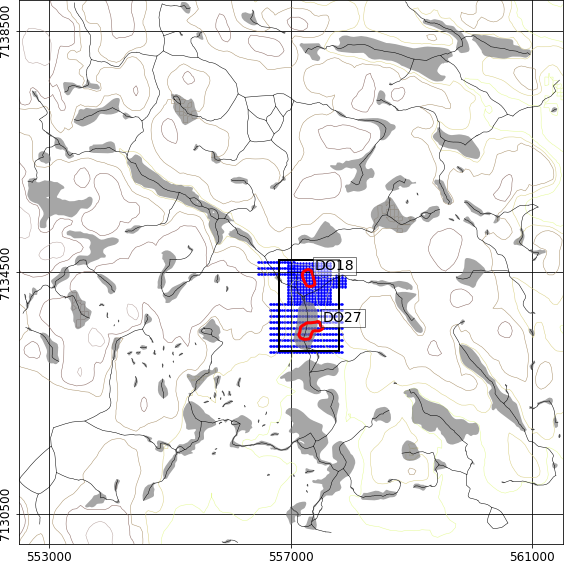 A ground gravity data set was collected in the winter of 1994 in two separate surveys. The data were leveled and combined into a single data set. Stations were spaced every 25 m in the easting direction and every 100 m in the northing direction over DO-27. Over DO-18, stations were collected every 50 m and every 25 m in the easting and northing directions, respectively. This gives a total of 972 data locations. We note that only elevation data for the survey over DO-27 were supplied to us. However, given that the data were collected in the winter, we were able to use our elevation model Fig. 373 and assume that the gravity stations were collected on the surface of the frozen lake. 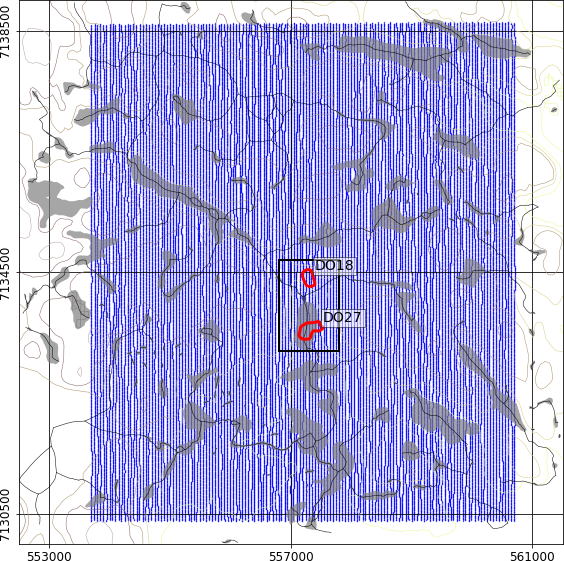 Airborne gravity gradiometry data were collected in 2001 using the Falcon fixed-wing system. The survey covers a much larger area around the known deposit in an effort to find additional drilling targets. Over 140 survey lines were flown along the North-South direction, with an approximate line spacing of 50 m, for a total of 1,120 line-km. The nominal flight height of the survey was 50 m. After processing, the Falcon system returns the vertical component of the gravity field \(g_{z}\) and the vertical component of the gradient tensor \(g_{zz}\). The fundamentals for the gravity and gravity gradiometry surveys can be reviewed in GPG Gravity. 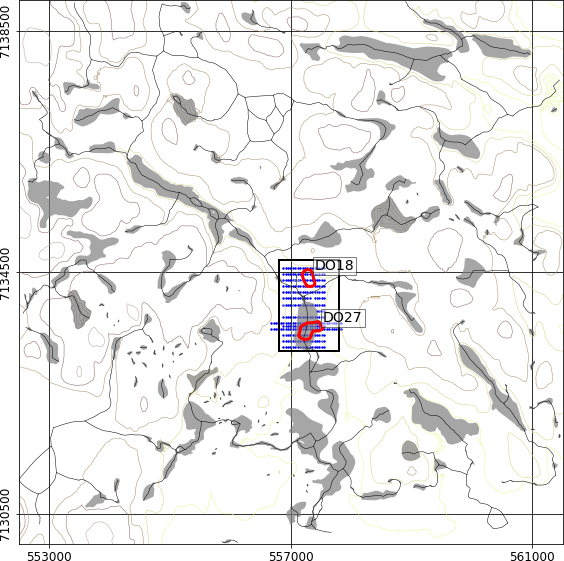 The first time-domain EM survey collected at TKC was a NanoTEM survey 1993. A total of 21 lines with 40 m station spacing were collected. The primary objectives of the survey were to delineate the kimberlite pipes and estimate the depth of the till layer. The NanoTEM system is a concentric transmitter- receiver configuration, 40 m and 10 m in side respectively. The receiver measures off-time data over 31 time-channels. 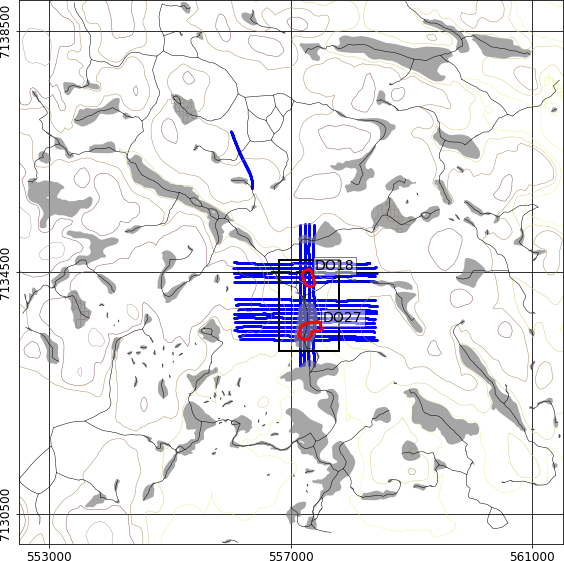 The first airborne time-domain electromagnetic survey collected at TKC was a helicopter-borne AeroTEM I survey flown in 2001. The survey was repeated in 2003 using a new generation of the system, the AeroTEM II. Fifteen survey lines were flown in the east-west direction, with 4 additional lines flown north-south. The overlap between the two sets of lines covers the approximate location of DO-27 and DO-18 with the objective of determining the vertical extent of the kimberlite pipes.

The AeroTEM system is a concentric transmitter-receiver coil system mounted on a rigid platform. The AeroTEM transmitter waveform is a triangular current pulse of 1150 microseconds duration operating at a base frequency of 150 Hz. The transmitter loop consists of 8 turns of copper wire, 5 m in diameter, with a maximum current of 250 A that produces a peak moment of 40,000 Am2. A cesium-vapour magnetometer bird is towed 10 m above the EM loops. 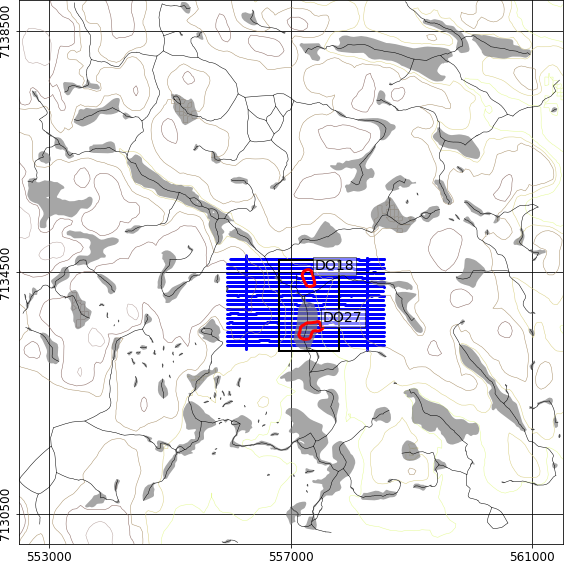 Due to peculiar negative data recorded by the AeroTEM system, the decision was made to collect a second TEM survey in 2004 with a helicopter-borne VTEM system. A total of 20 lines were flown orientated east-west using a 75 m line spacing, with an additional 2 tie lines in the north-south direction for a total of 39 line-km. The VTEM system measured the vertical component of the magnetic field using a concentric loop configuration. A cesium-vapour magnetometer bird is attached 15 m below the helicopter.