This case history follows the role of magnetic and time-domain electromagnetic surveying in the discovery and characterization of the Albany graphite complex, Ontario, Canada. The initial VTEM survey identifying the anomaly was flown by Geotech Ltd. in 2010. Based on the discovery of the deposit by Zenyatta Ventures Ltd. in 2011, Crone Geophysics Ltd. was contracted to perform supplementary ground-based TDEM surveys in 2013.

Thanks to the Society of Exploration Geophysicists for permission to reproduce figures and adapt text from:

The material presented here has been modified from the SEG-published version and is subject to the SEG terms of use and conditions. This case history was presented as a part of the SEG 2017 Distinguished Instructor Short Course. 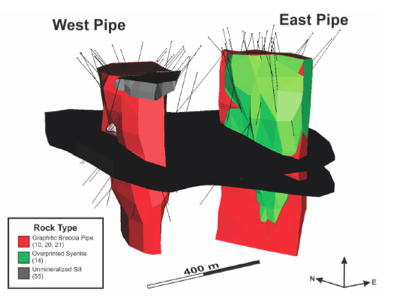 On January 19 \(\!^{\textrm{th}}\), 2012, Zenyatta Ventures Ltd. (Zenyatta) announced the discovery of a very rare type of hydrothermal graphite deposit on its Albany Project. The discovery was based on drill testing of anomalies identified by airborne electromagnetic survey flown in 2010 by Geotech Ltd. using its prototype VTEM \(\!^{\textrm{MAX}}\) time-domain EM system. Crone Geophysics & Exploration Ltd. (Crone) was contracted by Zenyatta to perform surface time-domain EM (TDEM) surveys on the Property during February and March 2013. Crone targeted the drill-confirmed East and West graphitic breccia pipes using an in-loop and out-of-loop configuration to couple with their top and steeply dipping edges, respectively, and successfully outlined their lateral extents.

This case study describes the airborne time-domain EM (TDEM) and magnetic geophysical survey results from 2010 that lead to the discovery and the subsequent ground follow up in 2013 using surface TDEM that better characterized the two graphite deposits (East Pipe and West Pipe) at Albany.