With a simple half-space model we explore electric field, magnetic flux, and conduction currents in the domain due to the vertical magnetic dipole (VMD) source. By analyzing those fields with variable transmitting frequency, Tx height, conductivity, and susceptibility values, we understand how the inductive source exicte the earth. In addition, we discuss how the measured magnetic flux data behave as a function of frequency.

Oscillating magnetic flux is generated by injected sinusoidal current in the loop, and will generate induced electric field everywhere due to Faraday’s law:

Separating total magentic fields as primary and secondary will be useful for our following analyses to see impact of the eddy currents induced in the earth. 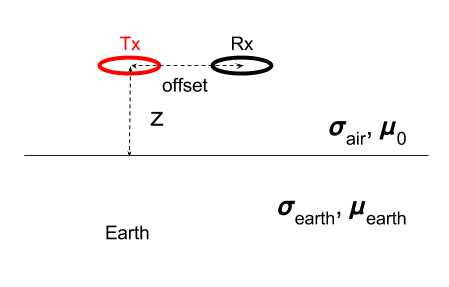 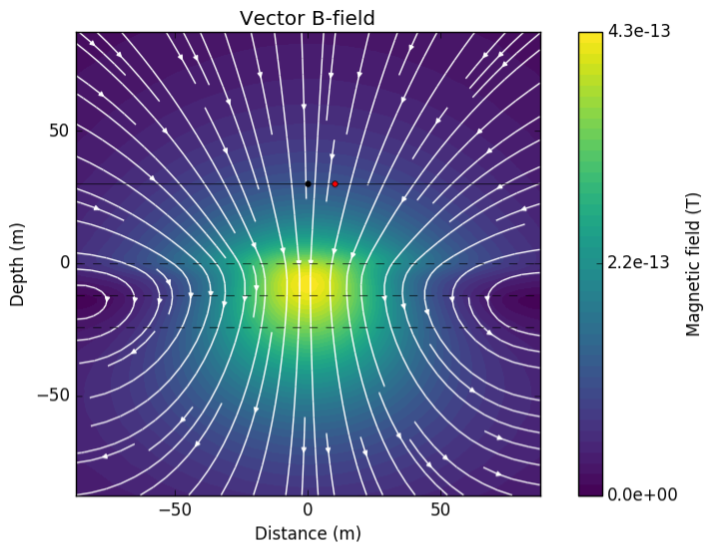 Compare imaginary and real part of \(\mathbf{B}_s\) Fig. 105 and Fig. 106 b. What is the main difference? Which component is more sensitive to the near surface?

You can use below link to play with the app that we used to run a given simulation.

Using the app introduced, now we are going to run suite of simulations to see impact of four main factors to EM fields due to inductive source excitation:

With the same setup, now we vary frequency from 10 6 to 10 3. We may expect that the lower the frequency the deeper information. Fig. 108 shows current density in \(y\)-direction at four different frequencies: 10 5, 10 4, 10 3, and 10 2. As the frequency decreases, distribution of currents are more spreaded indicating the lower frequency has deeper depth information. Amplitude of the current increases as frequency increases. 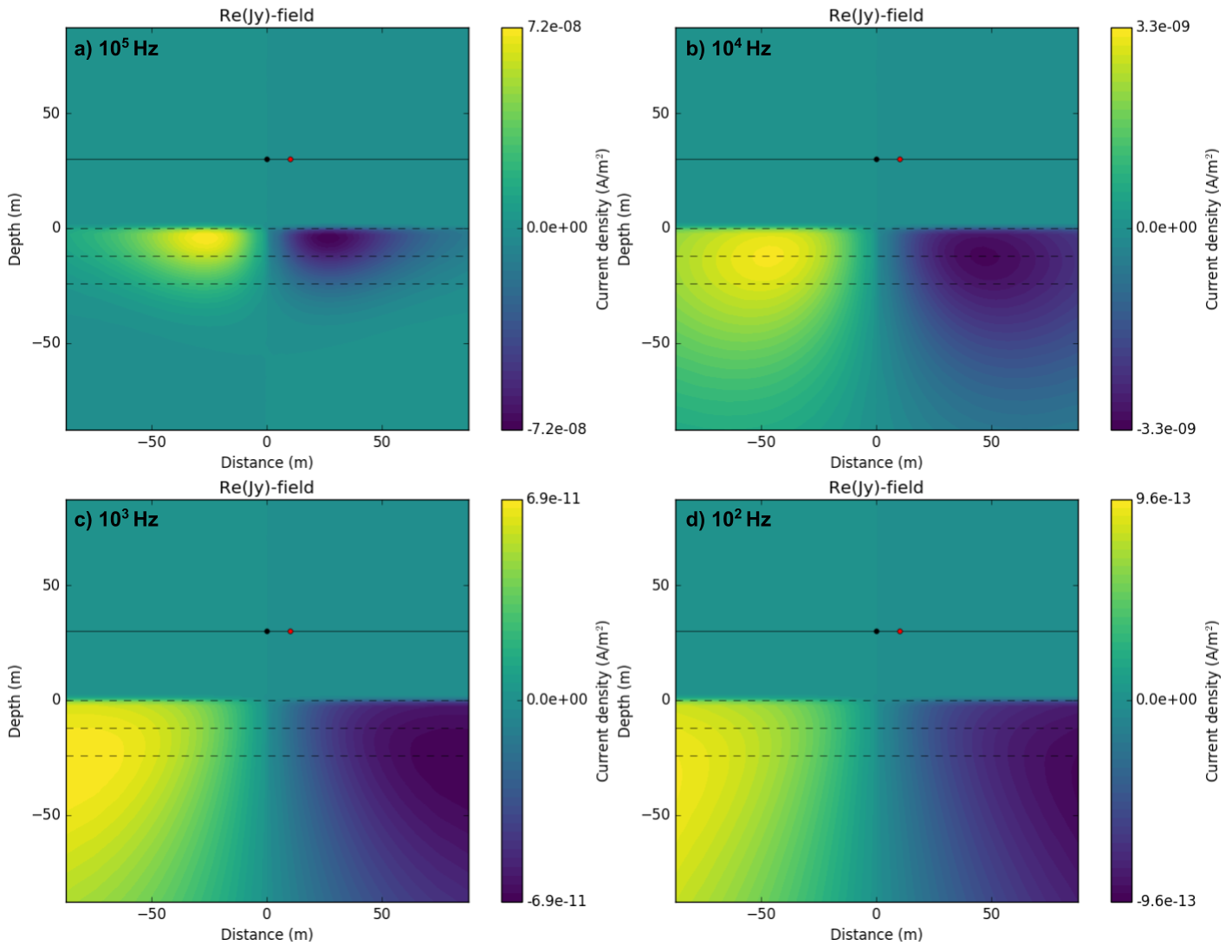 Previously Tx height (\(z\)) was 30 m similar to airborne EM survey. Then what happens if we lower the \(z\) to 0 m? This can be considered as a small-loop EM survey such as EM-31 on the ground. Here, we use different \(\sigma\) = 0.1 S/m to emphasize difference in the results of two simulations, and fix frequency as 10 KHz. Fig. 109 a and b respecively show the the imaginary part of \(B_z\) at \(z\) = 0 and \(z\) = 30 m. When the source is located right at the surface, magnetic flux is much more localized close to the near surface. However, when Tx height is increased to 30 m, magnetic flux has much distributed to both deeper depth and greater horizontal extent. This will indicate different resolution power in a) small-loop and b) airborne EM systems. First a small-loop EM survey will have much higher resolution to small near surface structures such as re-bar and UXO compared to an airborne EM survey. In contrast, an airborne EM survey will cover much greater volume of earth both in horizontal and vertical directions (i.e. greater depth of investigation). Similar difference can be recognized in the observed data. Fig. 110 shows corresponding \(B_z\) data at a receiver location marked as red in Fig. 109. Here the offset between Tx and Rx is 10 m. Changes in measured response are much more significant when \(z\) = 0 m compared to \(z\) = 30 m. Especially, when \(z\) = 0 m imaginary part of \(B_z\) shows sign reversal near 40 KHz , whereas when \(z\) = 30 m no sign reversal are occurred.

Fig. 110 Meausured imaginary component of \(B_z\) data as a function of frequency at Rx when Tx-Rx offset is 10 m.¶

Often a main goal of inductive source EM survey is imaging conductivity structure of the earth and for this, understanding how EM fields changes due to conductivity will be crucial. Here we assumed half-space model, hence we consider changes in a half-space conductivity value. Fig. 111 a and b show real part of \(B_z\) component when \(\sigma_{earth}\) is 0.1 S/m and 0.01 S/m, respectively. When \(\sigma_{earth}\) is more conductive, EM fields decays faster, and hence Fig. 111 a shows much localized distribution compared to Fig. 111 b. This also indicates, conductive ground has much limited depth of investigation compared to resistive ground. Fig. 112 show shows corresponding \(B_z\) data for both conductivity values.

Why susceptibility effects is significant at low frequency, real part of \(B_z\) data?