In previous section, we used a half-space model, and due to zero conductivity of the air layer, conduction currents cannot flow, and this made drastic changes in EM fields. More complexity can be made when the earth medium is layered, have different conductivity values because of reflection and refraction of EM waves at layer interfaces. By using a layered earth model having four layers including the air layer, we explore how conductivity contrasts in these layered medium can distort EM fields, and data measured at an Rx location.

We use a similar setup used in the previous section, but fix the Tx height to \(z\) = 30 m. Fig. 115 shows a setup for the layered-earth model. The thickness of the first and second layer will be fixed to \(h_1\) = 6 m, and \(h_2\) = 12 m, respectively. All simulation results will be shown following can be reproducible from the Harmonic layered earth app accessible through this link: 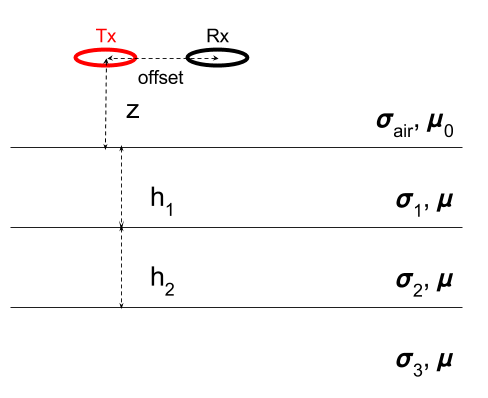 With the above setup, here we present how EM fieids behave upon different conductivity structure of the layered-earth. We first perform a simulation for the half-space case when \(\sigma_1=\sigma_2=\sigma_3=\) 0.01 S/m with \(f\) = 1000 Hz. Fig. 116 a and b show imaginary part of secondary magntic flux (\(\mathbf{B}_s\)) and electric field in \(y\)-direction (\(E_y\)). Secondary magnetic flux flowing downward show anomalous amplitude along 1st and 2nd layers. Induced electric field are circular and at high amplitude regions are along 2nd and 3rd layers.

Now we alter conductivity of the third layer, \(\sigma_3\) as 0.001 S/m, implying resistive basement. This effectively makes conductivity constrast between 2nd and 3rd layer. Fig. 117 a and b show imagniary part of \(\mathbf{B}_s\) and \(E_y\), respectively. At 3rd layer, amplitude of \(\mathbf{B}_s\) is decreased. Similarly high amplitude of electric field is localized to first and second layers. Less EM induction occurs when earth include resistive basement, but still this distorts EM fields suggesting potential to detect and delineate top boundary of the resistive basement.

Using the same four models: a) half-space, b) resistive basement, c) conductive cover, and d) resistive cover used to describe EM fields, here we present corresponding \(B_z\) data at the Rx location, which is 10 m apart from the Tx. Fig. 120 a-d correspondingly show the measured \(B_z\) data for above four models. Compared to the half-space model, when resistive basement exists, response of the basement model is smaller (< 10 KHz). Conductive cover makes the most drastic changes even in the data due to significant EM induction effects. For instance, peak of the imaginary part can clearly be observed for the conductive cover models, whereas recognizing peak of imaginary part is hard for other three models. Also, amplitude of responses are overall increased. Responses from the resistive cover model show the smallest amplitude. Also, difference from the basement model can clearly be recognized from 1000 Hz - 10 KHz. 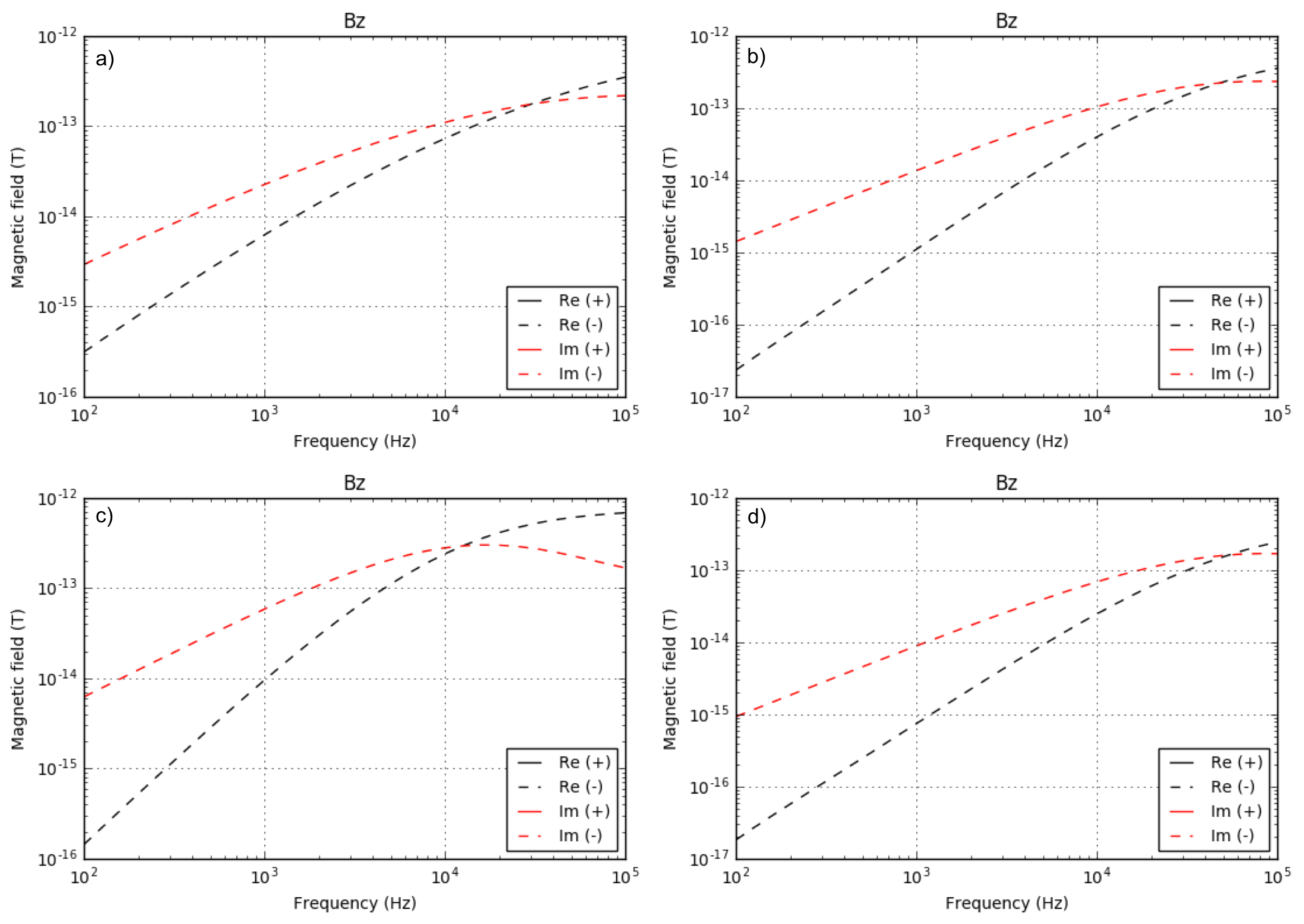